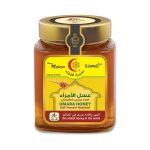 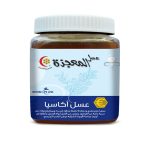 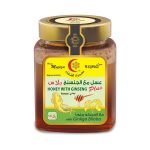 GINSENG HONEY PLUS FOR man

Sidr honey is produced by bees who only feed on the nectar of Sidr trees, one of the oldest trees that mentioned in the Holiy Quran. Sider honey is considered one of the finest honey and it’s been known for healing benefits since ancient time. The herbalists preferred it for curing diseases and promoting health because it gives better results comparing with other types of honey. Sidr honey has many variants, each has different features and specifications, all of which captured the attention of researchers in the Kingdom of Saudi Arabia who have conducted several experiments on samples of honey from all over the world (available in Saudi market). They found that Sidr honey contains a high proportion of metals.

Sidr honey is produced by bees who only feed on the nectar of Sidr trees, one of the oldest trees that mentioned in the Holiy Quran. Sider honey is considered one of the finest honey and it’s been known for healing benefits since ancient time. The herbalists preferred it for curing diseases and promoting health because it gives better results comparing with other types of honey. Sidr honey has many variants, each has different features and specifications, all of which captured the attention of researchers in the Kingdom of Saudi Arabia who have conducted several experiments on samples of honey from all over the world (available in Saudi market). They found that Sidr honey contains a high proportion of metals.

Sidr honey is characterized by golden light color, it darkens and tends to redness over time. While fresh and newly produced, it reminds you the same aromatic smell of Sidr tree in the month of October, the season when Sidr tree is flowering. Sidr honey is different from one region to another, so the taste, color, aroma and density. All variants share the exquisite taste, splendid aroma and all of them are very expensive. In Saudi Arabia, Sidr trees are found in areas close to Yemen, where the Kingdom of Seba used to be”the home of Sidr which is mentioned in the Holy Quran verse 16 of Sura Saba, “and something of few Sidr”. Each valley of Yemen has story to tell about Sidr.

Among the most famous areas in Yemen for producing Sidr honey are Doan in Hadramout, Gardan, Bayhan in Shabwa. In all these areas honey bees feed themselves exclusively on the nectar from the Sidr trees. Like other types of honey, Sidr honey needs good care through all stages starting from production to packaging, testing of samples and storage. Honey is very sensitive and it change at the lowest degree of temperature, any mistake while processing might turns it into harmful material instead of being healthy.

Some researches took place in Egypt had shown higher percentage of antioxidants in Sidr honey comparing with other types of honey. Sidr trees in Egypt are in Sina and other areas, and when our General Manager visited the Valley of Tur Mountain in Sina, he received Sidr honey as a gift from beekeepers there.

According to tests carried out by the laboratory technician Zabihullah Ahmed Reda at (Miracle Healing in Kuwait – quality control department) Sidr honey doesn’t change when exposed to heat, whether low, medium or high and even at the temperature of 80° C degree, except that little thing, which is negligible in terms of both sugars diverse it contains or enzymes that change rate in other types of honey very quickly even when exposed to low temperatures, as well as the HMF (an indicator of the adulteration of honey with invert syrups -syrups of glucose and fructose), did not rise in Sidr honey except for two degrees or three degrees, while it rose in the other types of honey and reached up to 30 and even 50 degrees (in ppm) at temperature of 70-80 ° C within half an hour. Also a sample of an old Sidr honey stored in sealed glass for 10 years is examined in the same laboratory, it shows no changes in the chemical composition, quality specifications and the percentage of HMF didn’t increase.

When the director of the company and founder asked the Director and Technician of the laboratory of quality in Kuwait about his experiences and observations over the past years about the types of honey entering the country, he told us that he found this type (means Sidr honey) is the finest honey and completely comply with the required standards and specifications. Several laboratory examinations were done on Sidr honey at Kuwait Institute for Scientific Research (a governmental research foundation with high potential and high-tech devices) it has confirmed the quality of Sidr honey.

In a recent study by researcher Dr. Aman Ahmed Mohammed Zubair from the University of “UCSI” in Kuala Lumpur, Malaysia supervised by Dr. Patrick Oukichacoa, demonstrated the effectiveness of Sidr honey in treating inflammation, reducing excessive fever and stabilize activity of the body’s cells and protect against injury and relieve pain. The study, conducted on (rats) showed that, the pharmacological effect of Sidr honey is higher than aspirin and indomethacin (an antibiotics and pain relievers).

Researches are still underway to determine the pharmacological mechanical of Sidr honey and its effectiveness for treating other diseases, The study is the first scientific document published internationally.

The study was published in the magazine (World Academy of Medical Sciences, Engineering and Technology) and high court . Also the research was discussed in a conference held in France – Paris Augustus 2011, and Britain – London Dec, 2011. It worth mentioning that the researcher was a girl student from Yemen studying Medical genetics and biotechnology in Malaysia. She’s a member of the American Society for Pharmacology and therapeutics, and a member of the British pharmaceuticals society.

Despite these obvious facts, Sidr trees is still surrounded with a lot of ambiguity in the Arab culture, it says that Sidr honey is been used in magic and sorcery along with others treatment uses. Hundreds years ago, Sidr honey was given as a gift to kings, princes to express appreciation and loyalty. In other cultures, we found that old Indian used Sidr honey to solve eyes’ problems and clear vision. In Western culture, Sidr trees is sacred among Christians.

Arabs Beekeepers Association during its sixth International Conference has revealed a research conducted at the Faculty of Medicine, University of Aden in order to study the effect of four types of honey from Yemen (Sidr, somor, qasas, and range on dressing the gluteal and breast abscesses. The results showed that there was significant difference (P>0.01) between the honey sorts on dressing period of gluteal abscesses. The period was shorter (8 days) when treated with sidr honey, while the longer period (13.25 days) was found in treatment of range honey. The dressing period was 9.75, 10.5 days in somor and qasas treatments respectively. There was no significant difference between the dressing period of breast abscesses when using honey sorts, sidr, somor and qasas. The using period was 8.33, 9.33, 11.0 days respectively.

Also Arabs Beekeepers Association during its sixth International Conference has revealed experiments conducted in the laboratory by the Department of Plant Protection, Faculty of Agriculture – University of Sana’a to evaluate the influence of six Yemeni honeys (Sallam, Sidr Wessabi, Sidr Dwani, Flowers, Dwani pasture and Somor) another commercial honey, with five concentration (0.5%, 1%, 5%, 10% and 20%) against pathogenic bacteria, Salmonella Escherichia coli Staphylococcus aureus Pseudomonas aurogenosa !Proteus. Our results indicated that the honeys for good effects against pathogenic bacteria were Sallam, Flowers and Dwani pasture, followed by Sidr Wessabi and the third honeys group were Sidr Dwani and Soomur. However, no antibacterial activity was seen for commercial honey.

The best concentration for good antibacterial activity was 20% followed by 10%. It is clear from our data that Dwani pasture honey exhibit good activities against growth of E.coli and Pseudomonas aurogenosa at all concentration, also, minimal inhibition was appeared against Staphylococcus aureus at 5, 10 and 20% for its. However, Sidr Dwani honey was appeared highly effects against all pathogenic bacteria under study with highly significant at 20% followed by Sallam honey at the same concentration. No antibacterial activity was seen at honey concentration 0.5, 1 and 5% for the majority honeys. Key words: honey, antibacterial, pathogenic bacteria and Yemen.